A new understanding is emerging on the origin of the building occupied by John Penn Marine Engineers on the Thames at Deptford. It has always been thought and asserted that the building was constructed specially for John Penn's company. However other projects occurring prior to Penn's occupation may shed light on a different story. Richard Hartree's volume on John Penn's Works states that the company moved to Deptford in the mid 1840's. This date corresponds with the understanding currently emerging based on new research into the site and building of Payne's Wharf. 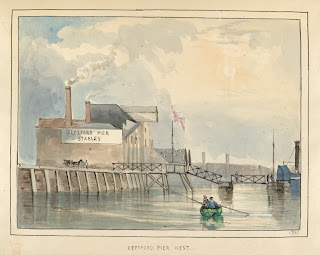 It is just possible to discern a series of high arches and a parapet
on the river elevation of this 1841 water-colour of Deptford Pier.


This research begins with the Deptford Pier and Improvement Company constituted in 1836. Preparatory survey work in the area by Horton Ledger occurred in 1835. In 1836 Deptford Pier is described as "now in progress'. In 1839 the Civil Engineer and Architect's Journal reads "to alter and amend the act to provide additional property" suggesting that property has already been acquired.  The act referred to was a Local Act passed in Parliament giving permission to purchase land in order to build a railway spur that was intended to take Steam Boat passengers from the river to Deptford Station,
"from the Deptford end of the road, a branch is to extend to the the new Deptford Pier, now in progress; so that passengers, on landing at Deptford, may at once be carried into the heart of London, with all their luggage, at a comparatively trifling expense, and free from all the dangers and vexatious delays of the Pool of the Thames." (Percy and Timbs 1836) 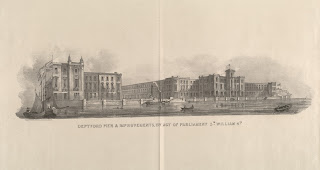 The incredible scheme for Deptford Pier, drawn by Horton Ledger, showing the Royal Dockyard to the right of the image.

The cast iron wharf wall is a construction of 1838 and described in detailed plans of the period by Colonel George Landmann, the chief architect/engineer on the Deptford/Greenwich railway. If the cat iron wharf wall is contemporaneous with the Italianate arches then Colonel George Landsmann would be the most likely candidate as architect of Payne's Wharf. However, Cubitt is also known to have used sheet iron wharfing at Brunswick Wharf. 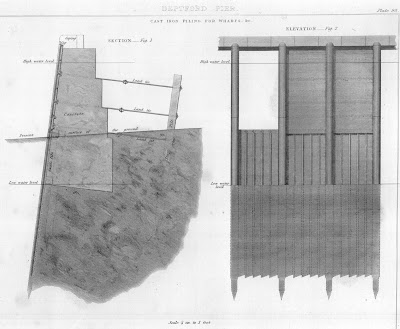 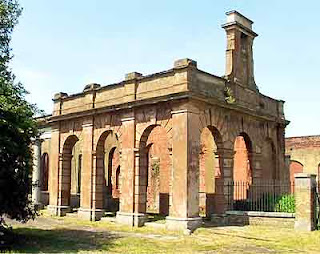 William Tite built the Brunswick Wharf buildings  for a steam boat to railway terminal serving the same function as the proposed Deptford Pier Project at the time the Deptford Pier was being proposed.  Tite's Gosport Station is shown opposite. There is a marked similarity between Lewis Cubitt's King's Cross terminal and Payne's Wharf. Cubitt was surveyor to Deptford Parsh of St. Nicholas. It is also remarkable that Cubitt used laminated timber to construct the first roof spans, these were later replaced by iron. Payne's Wharf's original Diocletian windows were also in vast arched laminated timber frames. These original frames, cited in English Heritage's Grade II listing of Payne's Wharf, were removed and destroyed by the present developer Lane Castle. We were able to salvage parts of the frames for safe keeping and these were studied by the industrial archaeologist Malcolm Tucker of Greater London Industrial Archaeology Society.


John Penn and the Cubitt Family
The relationship between the Cubitt family and Penns is complex. William Cubitt's design for a prison treadmill was constructed by John Penn's in 1823 (Centre for Kentish Studies Q/AGw/16/3  1823). Benjamin Cubitt became foreman of works for Penn's company. Benjamin also proposed a railway from Cold Blow Farm over Trundley's Lane and across the Grand Surrey Canal through Grove Street to Deptford Wharf ending at the west of the Wet Dock at Deptford Strand. The Journal of Transport History 1995 Vol 2-3 page 48 refers to a wharf at Deptford on the Thames being built by 1852 for the Brighton and South Coast Railway. Joseph Cubitt worked for SER in 1846 on the Ashford Canterbury Ramsgate and Margate line. The history of the emerging railways is far too complex to cover here, suffice it to say that there is considerable evidence of the Cubitt family's involvement in the early railways in the area of Deptford, New Cross and the Thames, in particular Brunswick Wharf where identical cast iron sheet piling was used to construct an identical wharf wall. A good source for disentangling the Cubitt's and the railway companies involvement is the wikipedia entry on London Bridge Station. William Cubitt participated in the creation of Deptford Pumping Station with Bazalgette. It has been said that what William Cubitt ordered Bazalgette carried out.

William Cubitt's Ipswich Steam Navigation Company ordered steam engines from John Penn's for two ships. When the company collapsed Penn was still owed money for the engines and a court case ensued. Could it have been the case that the works commenced at Deptford Pier, comprising the six grand italiante arches, reminiscent of the railway architecture of the period, Blackwall, Gosport, King's Cross, were offered to or purchased by John Penn's in settlement of debt owing to them? The direct correspondence between the 1828 cast iron pier of Brunswick and the extant pier at Deptford suggests a strong link between the two projects. Architectural similarities between the Cubitt project of Hayes Galleria Wharf and Payne's Wharf, a stable block at Buckingham Palace where Edward Blore fashioned the south eastern elevation, requires further consideration before definitive conclusions as to exactly who the architect of Payne's Wharf was can be drawn. Perhaps more striking in similarity to Payne's Wharf is the image of the disused railway station at Gosport by William Tite. If Paynes Wharf is the work of Thomas Cubitt, architect of the east front of Buckingham Palace, given his death in 1855 this would place the construction of Payne's Wharf within the prospective period of the Deptford Pier Junction Railway 1835 to the mid 1840's coinciding with any number of events, including the extension of Deptford Pier to include the Bridge House Estates land abutting Upper Watergate, the takeover of the London and Greenwich Railway by SER in 1844, Benjamin Cubitt's construction of the railway to Deptford Wharf. Perhaps the collapse of William Cubitt's Ipswich Steam Navigation Company, and the competition exerted by William Bush and Henry C Bingham's ambitious plan for Deptford Steam Ship Docks, provided Penn with the opportunity to expand his works to Deptford and accrue some return from what was owed him?


From John Herapath November 28th 1836,
"In consequence of the number of persons going to the Steam vessels and back again we have a little railway of 750 yards at our terminus in Deptford to the Deptford Pier which is now in execution..." (Herapath 1836:271) The same magazine reports the passing of a bill in the Lords for the railway to convey passengers from London Bridge to Deptford Pier in fifteen minutes "and the pool and its dangers and delays avoided." (Herapath 1836:192) "The first iron pile was driven in the presence of all the directors and it was hoped the whole would be complete in eight months.(Herapath 1836:238)

Premises formerly known as the Three Tuns Public House in Butcher Row, St. Nicholas, Deptford were purchased by John Penn from Thomas Norfolk on 21 November 1859 ( ACC/1712) These premises may have been leased to John Penn as early as 1841. See also, Lease Trustees of the Holwell Charity to John Penn  (ACC/1712/16  1 Oct 1841) Authority of the Trustees of the Holwell Charity to John Penn to pay purchase money to their solicitors, John and William Hawkins of Hitchen with Messrs Hawkins receipt for purchase money  (ACC/1712/22  22 Feb 1862-14 Mar 1862) Plan showing boundary line between the freehold and leasehold properties at Greenwich  (ACC/1712/44  Jun 1876)

In 1843, a legal case is lodged against the Deptford Pier and Improvement Company. 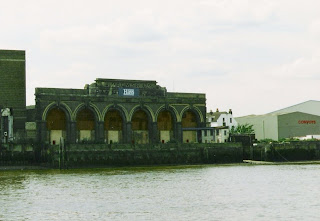