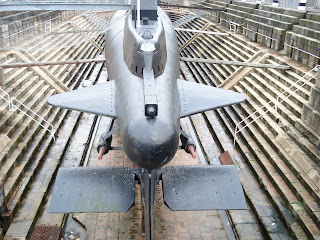 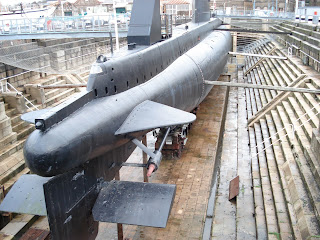 Double Dry Building Dock/Great Georgian Dock/Head and Stern Dock at Deptford
This is the first in a series of blogs related to Convoy's Wharf, the former King's Yard at Deptford.

In 1954 the oldest naval building in the country, Henry VIII's Great Storehouse of 1513, was demolished for "economic and strategic reasons". Fifty years later, in 2004, the foundations were scheduled as an ancient monument. Redevelopment of the site of the former dockyard, now Convoy's Wharf raises the question of how best to respond to the dockyard structures that remain albeit below ground. The dockyard at Deptford served the nation as a military establishment over a period of five hundred years. The history of this stretch of the Thames is unsurpassable, and written about extensively elsewhere. The opportunity now exists to maximize Deptford's most historic cultural assets. Over the coming weeks we will be posting our aspirations for the future of the site.

The photos above show the dry dock at Chatham. It's possible that the double dry building dock at Deptford is of similar construction yet twice as long as the one shown here. When we hear about "archaeological remains" at Convoy's Wharf, we may be talking about structures like this. We already know from previous archaeological test pits that "by far the greater part of the dockyard survives as buried structures filled in intact." Supposing the dry dock is a granite construction and simply filled in intact? It was filled in soon after 1869 for the construction of sheep and cattle pens for the Metropolitan Foreign Cattle Market. In the master plan proposed by Richard Rogers Partnership in 2005 for the redevelopment of Convoy's Wharf, the Great Georgian Dock, as it is called, was singled out for protection and the possibility of excavation. At the time in 2004, statements submitted to Lewisham Planning Authority earmarked the dock for a public open space, maintaining the opportunity for future aspirations to excavate if possible.
In the current proposal this public open space is eliminated and Hutchison Whampoa instead propose moving the GLA designated safeguarded working wharf inland away from the waterfront to include the area occupied by the Great Georgian Dock. This considerable alteration of the RRP master plan obliterates a number of significant opportunities for maximising Deptford's cultural heritage assets and their major contribution to a sense of place in the redevelopment of the former dockyard. The RRP proposals offered a green link with Twinkle Park with pedestrian and cycle access through the ancient dockyard gateway evident in the listed perimeter wall opposite Twinkle Park. This green link offers the further opportunity of a reinstatement of a historic dockyard garden of the 18th century which occupied that part of the site, being the high status garden of the Clerk of the Cheque of the dockyard. The potential green link area also incorporates several TPO protected London Plane trees, the only surviving trees of any considerable age (more than 100 years old) across the site of Convoy's. 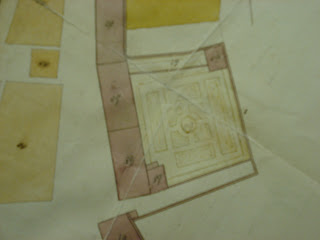 Image showing Clerk of the Cheques garden circa 1774 and ancient entrances to the dockyard. 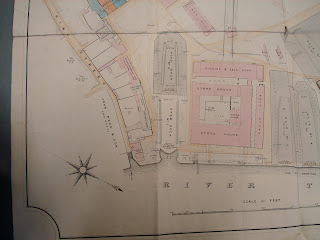 Maintaining the GLA designation for the safeguarded working wharf would maximize the potential of the Great Georgian Dock area. A  green link with Twinkle Park offering pedestrian and cyclist access close to the Thames Path to and from Greenwich would be created. This will bring visitors into a new green space of an historic garden within the listed perimeter wall of the dockyard adjacent to a group of established London Plane trees. The route would then lead to the dock and the river.
This second image above shows a plan of the dockyard during the early period of the Metropolitan Foreign Cattle Market. The ancient gateway to the dockyard is shown opposite the Red Lion public house. Imagine the possibility of entering through this gateway, encountering the former garden of the Clerk of the Cheque, with views of the Master Shipwright's House and Offices alongside the Great Dock. To the right of the Great Dock entrance are the Landing Place and Lookout ceremonial watergate stairs in front of the 1712 storehouse, also demolished in the 1950's. These steps to the river, shown in a number of paintings by John Cleveley, remained open until the 1930's. They were topped by an elaborate set of gates, two receiving houses and a flagpole. The stairs could be opened once more for public access to the foreshore.
The bridge  across the centre of the dock shown on the plan could also be re-instated. This bridge is one of a possible seven bridges which could potentially cross re-opened docks, slipways, basins and mast ponds, making this section of the Thames Path unique. Recent excavations of the entire peninsular land mass at the mouth of Deptford Creek for Galliard Homes and restoration of inland bodies of water at Canary Wharf suggest what is possible with new developments in relation to the river and inland bodies of water. Where the docks, basin and mast pond entrances are proven to be of granite and brick construction, sensitive restoration could allow for re-opening. The re-opening of these penetrations from the river could provide marginal habitat for Thames water birds marrying heritage and ecologial aspirations. For instance, mast ponds could be excavated and restored to create a London Thames swannery. The next image shows the pair of mast ponds with the stone-flagged slipways running down to the river's edge. These stone flagged slipways could provide direct access for bird-life. with bridges over for pedestrians and cyclists. 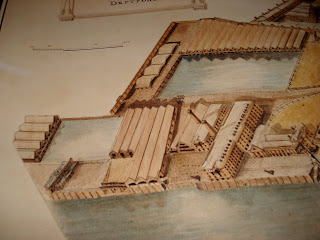 The seven bridges comprise, firstly, a bridge over the Great Georgian Dock, with two bridges across the mouths of the twin sister slipways, a fourth bridge crossing the mouth or casson of the John Rennie Basin, a fifth bridge crossing the single slipway, a sixth bridge crossing the early mast pond slipway and a seventh bridge, a re-instatement of the George Ledwell Taylor swing bridge crossing the canal to the eighteenth century mast pond. All of these bridges existed and some remained until the turn of the twentieth century. The seven bridges resonate with the seven continents with which Deptford has profound historic connections. It is up to interested parties now, whether individuals, or the PLA, the Environment Agency, Thames Estuary Partnership, English Heritage and Lewisham Planning not to succumb to the awful irony of fifty years ago, which saw the destruction of the Great Tudor Storehouse for short-term "economic and strategic" reasons only to schedule the remains fifty years years later. 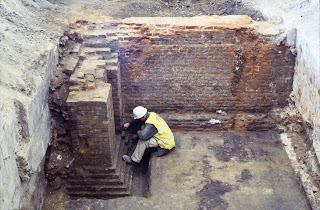 The cultural capital held in Deptford's historic cultural assets belongs to a local and international interest group comprising families whose ancestors worked in the King's Yard, sailed on voyages of discovery, or were transported to the Colonies of America and Australia, to those who understand that the history of Deptford is the history of the making of a nation. It becomes a political matter of social exclusion if Deptford's historic cultural assets do not receive the statutory protection afforded to other Royal Dockyards so that the wealth inherent in the intellectual property of Historic Maritime Deptford can be exploited and enjoyed by a constituency which is global.
Posted by shipwright's palace at 07:39