Hortus Conclusus: The Garden of James Butler Morn, Clerk of the Cheque in His Majesty's Yard at Deptford 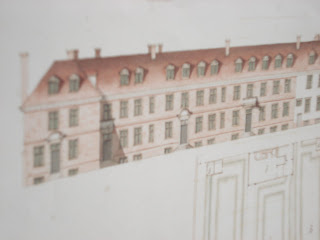 As a high ranking officer in the dockyard, the Clerk of the Cheque was handsomely accommodated. In 1698, the Clerk of the Cheque's house was the finest in the dockyard. From 1669, the Surveyor of the King's Works with the responsibility of signing off building projects was Sir Christopher Wren. The houses depicted in the image above are post-Restoration and likely to have been constructed in or around 1670. This terrace is identical to a terrace of dwellings for dockyard officers in Plymouth and thought by the late Giles Worsley to be by the hand of Robert Hooke, according to a superb article by Celina Fox, "The ingenious Mr Dummer : Rationalizing the Royal Navy in Late Seventeenth Century England" for the British Library. According to Professor Doctor K.A.Ottenheym "English classical architecture was transformed in the 1670's and 1680's by taking inspiration from Dutch houses." Ottenheym also records that Hooke was inspired by French architecture. (Ottenheym 2007:137) The ground plan of the Deptford officers' terrace expresses the double and single cube rooms characteristic of the work of Inigo Jones and his nephew John Webb. The Clerk of the Cheque's house, situated in the corner of a fine uniform terrace, that would have been familiar to Samuel Pepys and John Evelyn, was valued at £946.10. The imposing brick built house boasted eight bays and two staircases. Celina Fox writes about the corresponding terrace in the Plymouth yard stating, "The dwelling houses of the officers built to a French or Dutch influenced design as a single terrace, are the model of orderliness compared with those of other dockyards." (Fox 2007:43) However the Deptford Officer's terrace may be of an earlier date than Plymouth which dockyard historian Jonathan Coad dates to 1692. The Deptford terrace is shown as extant in 1688. The Navy Board Office at Seething Lane, Crutched Friars, is dated to 1674-5, arguably by Christopher Wren and/or Robert Hooke and of similar style. Whilst the individual houses comprising the Plymouth terrace are identical in scale and internal arrangement such as number of rooms, placing of chimneys and staircases and their number, the houses comprising the Deptford terrace share none of Plymouths's uniformity internally. No two staircases or their positions are identical, just as their is no parity to the number of rooms each officer enjoys. Archaeological investigations may reveal more information of interest not only to Deptford but to Plymouth and possibly to other yards. Further archive based research may established the time of build and even the architect and precisely when the buildings were altered in the eighteenth century. The greater part of the terrace at Deptford was demolished to make way for cattle lairs c.1900 for the Metropolitan Foreign Cattle Market, however the Tapp House a Tudor period building, the Pay Office and Clerk of the Cheque's office, clearly identified on Dummer's survey of 1698 as a building of the same period as the terrace, survived until the 1940's.  Below, Clarendon House, by Sir Roger Pratt for the Lord Chancellor 1664-1667. 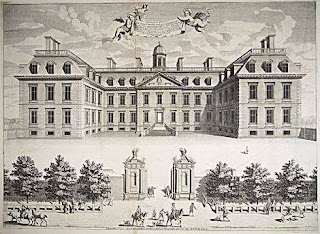 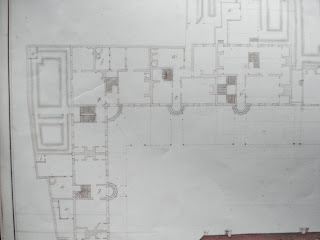 Above internal arrangement of the Officers' Terrace, showing the Clerk of the Cheque's House in the corner.
Perhaps more than any other, the Officers' Terrace resembles the work of Sir Roger Pratt, great friend of John Evelyn who described Clarendon House as "the best contriv'd, the most useful, graceful and magnificent house in England". His work for the Lord Chancellor, Clarendon House 1664-1667 is at the very least influential in the design of the terrace. The Lord Chancellors's daughter married the Duke of York, then resident in the dockyard at the Navy Treasurer's House, adjacent to the Great Storehouse, and overlooking the Basin wherein rode the King's Ships. As little is known of the internal layout of Clarendon House, the archaeology of the Officers' Terrace becomes even more important than previously thought. 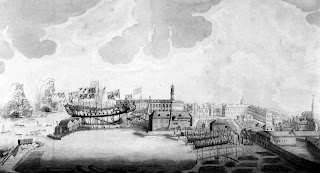 At the time of Dummer's survey, the timber framed Tudor house of the Master Shipwright Fisher Harding was valued at a comparatively paltry sum of £100.11.11. Perhaps it was this discrepancy that prompted Master Shipwright Joseph Allin in 1705 to agitate for a new house of equivalent status. 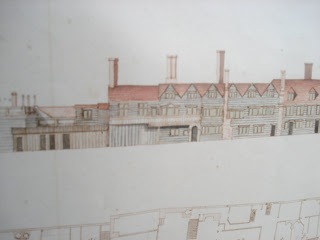 Since  Joseph Allin built his new house of eight bays with two staircases, to replace the one shown above in 1698, and overspent his Navy Board approved estimated  budget of £525 by some £300, questions were raised in Parliament and Hansard records mention of the "Shipwright's Palace".
These high status dockyard houses would have been incomplete without the corresponding high status gardens. The gardens and their buildings which included privies, wash houses and banqueting houses are depicted in numerous plans of the dockyard throughout the centuries. The officers' stables and hen houses were located elsewhere in the yard. Perhaps the richest historic source of information for the dockyard gardens is found in the dockyard model series of 1774 made for George III. The depiction of the Clerk of the Cheque's garden in a plan of 1774 corresponds with that shown in the 40ft to 1inch scale model made at the same time. Research and archaeology carried out at Chatham dockyard concludes that the modellers drew "as accurate a representation of the gardens as of any other feature of the dockyard." Paths and beds depicted on the model have been rediscovered. A complete pond lined with waterproof cement- terraz or pozzolana, was also discovered. (Hall and Lear 1992:135-6) 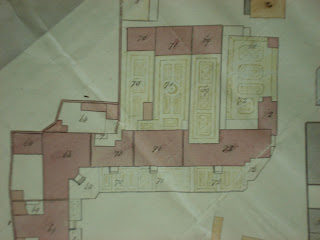 The image above shows the officers' gardens in Deptford Dockyard circa 1774. The houses which are  shown in Dummer's survey of 1698 are shown here in their mid eighteenth century guise. They were demolished in the early 1900's to make way for cattle lairs for the Metropolitan Foreign Cattle market.
The houses are shown here in a photograph taken shortly before demolition. 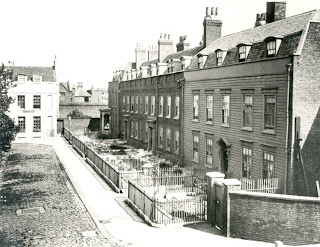 The houses with their sash windows, door cases, raised parapets and lead rain goods could easily be mistaken for buildings of the early to mid-eighteenth century rather than 'updated' buildings of the mid-seventeenth century.
Remarkably the area that became the Clerk of the Cheques garden has survived without being substantially built on for nearly four hundred years. First seen in Evelyn's annotated map of 1623 the area of land, assigned to the Clerk of the Cheque as a garden, remains a green space through a series of plans dated consecutively 1698, 1740's, 1753, 1774, 1808, 1830, 1868, 1870, 1898, 1930's, 1960's. The Richard Rogers Partnership master plan designated this area as a public open space providing a green link with Twinkle Park. This plan leaves open the possibility of a re-instatement of the Clerk of the Cheques garden. On the officers' gardens in Chatham, Hall and Lear have stated that "the initial designer from within the Board of Works has not yet been identified but as the plans came from London he could have been associated with the group led by Vanbrugh and Hawksmoor." (Hall and Lear 1992:150)
A glance at Chatham Dockyard on google earth reveals several of the officers' gardens have now been restored according to the historic plans and model of 1774. Todd Longstaffe-Gowan's article "Urban Gardening in England" shows several photographs of the Chatham gardens' derelict and overgrown condition. Based on the evidence present in historic maps and plans and the confirmed evidence of the correspondence
between the garden designs portrayed in the models of 1774 and archaeological surveys carried out in the
Chatham Officers' gardens, in Deptford we can be hopeful of finding sufficient archaeological evidence on the site of
the Clerk of the Cheque's garden to re-instate an important characteristic of the dockyard, as well as a rare
and exciting example of garden design of the eighteenth century. Assuming that the Richard Rogers
Partnership masterplan is adhered to by Hutchison Whampoa and that their current proposal to move the
GLA designated safeguarded working wharf away from the riverfront
to the area covering the Great Georgian Dock, TPO London Plane Trees and the site of the
Clerk of the Cheque's garden is rejected by the GLA and Lewisham Planners
the opportunity for one of the most stimulating stretches of the Thames Path in London remains.
Posted by shipwright's palace at 07:39