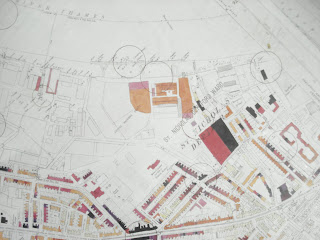 Its often said that the dockyard was heavily bombed during WWII. In fact most of the destruction occurred post-war. This map of bomb damage to the area of the dockyard shows how little damage was actually done. The black colouring shows irreparable damage, the orange colour minor reparable damage. The circle covering the landing stage may be the bomb that killed the U.S. marines stationed in Deptford during WWII. They were killed when a V2 rocket hit their amphibious landing vehicles, LST's that were moored alongside the jetty.
Posted by shipwright's palace at 10:50